This report approaches fair shares in a manner that draws directly from the core equity principles of the UNFCCC. These principles have been nicely summarized[1] as follows:

The Climate Equity Reference Calculator, within which the calculations in this report were done, is an online tool and database that allows the user to select a global mitigation pathway of a specified level of ambition, thereby determining the amount of required global mitigation effort – a mitigation gap – to be fairly shared among countries according to the UNFCCC principles of equity.[2] The user then selects specific equity-related settings relating to responsibility and capability, and other key parameters, which are used to calculate the implied national fair shares of the global mitigation effort for all countries. In particular, each country’s fair share of the global mitigation effort in each year is determined by its share of global responsibility and capability, which are calculated in a manner that can exclude the income and emissions of individuals below some specified threshold.

Figure 1: Total globally required mitigation (blue area) divided among countries in proportion to their share of global responsibility and capability.

Figure 1 illustrates the general effort-sharing approach of this analysis, for it shows how a mitigation gap is partitioned into mitigation fair shares that are assigned to individual countries on the basis of their responsibility and capability.

As has become customary in discussions of equitable effort-sharing, capability is represented in financial terms. This is not necessarily because financial income is the only important type of capability for dealing with climate change, though it is very highly correlated with the other various types of capability that are also important (technological capability, institutional capability, etc.). Just as income is typically considered in a progressive manner in national tax policy, it can analogously be defined in a progressive manner for the purposes of defining capability. A straightforward method for doing this is to define an income level below which income does not count toward capability, similar to a “0% tax bracket” that exists in most national tax schedules. Extending the comparison to a tax schedule, a higher income level can also be set at which income counts fully toward national capability, analogous to the maximum tax bracket. Between the two income levels, income increasingly counts toward the calculation of a country’s capability. The Climate Equity Reference Calculator refers to the lower income level as the “development threshold” and the higher income level as the “luxury threshold”.

While setting this lower threshold to reflect a ‘development threshold’ allows one to exempt the emissions and income of poor individuals, it is far from being a guarantee of equitable access to sustainable development. In particular, it does not assert a positive right  to development, or even a positive right to energy services. That said, an exclusion set to reflect a development threshold does make a significant difference in the calculation of fair shares for countries (e.g. LDCs, India) with mostly poor people. 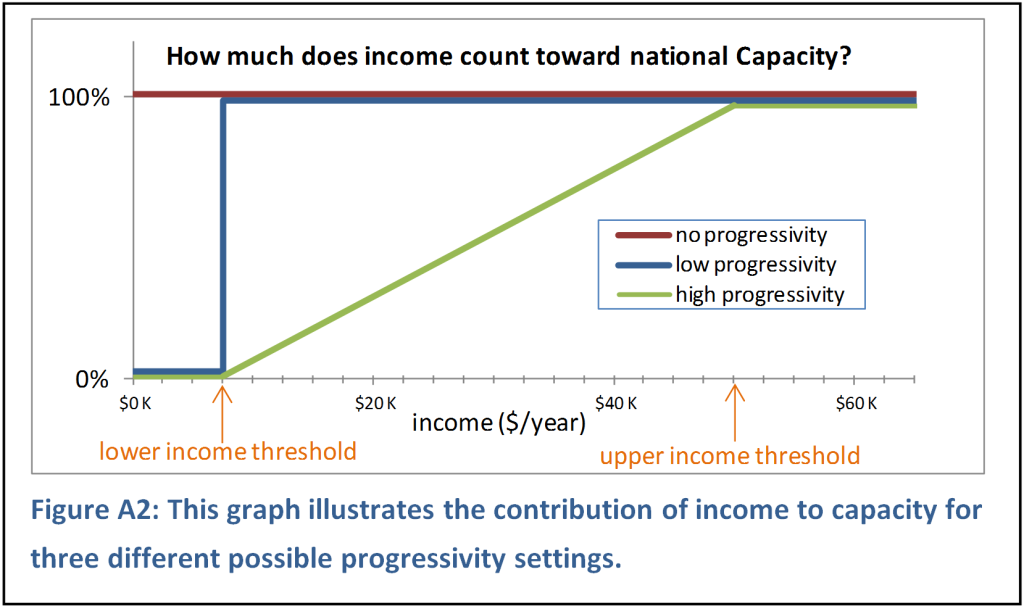 Figure 2: This graph illustrates the contribution of income to capability for three different possible progressivity settings.

Figure 2 illustrates the three different progressivity cases presented in this report. In the “No progressivity” case, every dollar of income earned by every person in the country, regardless of their total income, would count 100% toward the calculation of a country’s capability (red line). In the “Weak progressivity” case, income earned below a lower income threshold (here shown at $7,500/year) does not count toward national capability, and income above counts 100% (blue line). In the “High progressivity” case, income below the lower income threshold does not count, income above a higher threshold counts 100%, and between the two thresholds income counts to an extent that gradually rises from 0% to 100% (the green line). These calculations are done using income distributions (see Figure 3) based on data from the World Bank World Development Indicators and the World Income Inequality Database. 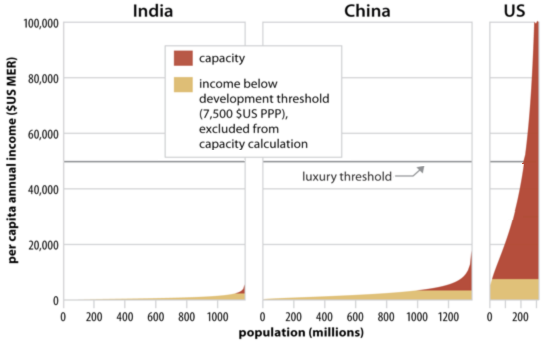 Responsibility is represented by cumulative GHG emissions from some user-specified initial year, which directly reflects a nation’s contribution to climate change. Similar to the definition of capability, responsibility is defined in a manner that excludes emissions corresponding to consumption below the specified lower income threshold.

For several representative countries (or groups), Table 1 below shows the share of global capability and responsibility in 2010, and averaging them, the RCI in 2010. The RCI in 2020 and 2030 is shown as well. As the countries’ economies and emissions are projected to grow at different rates over time, their share of global capability and responsibility correspondingly varies. For each country, this RCI can then be used to determine its fair share of the globally required mitigation effort, as illustrated in Figure 1, above. 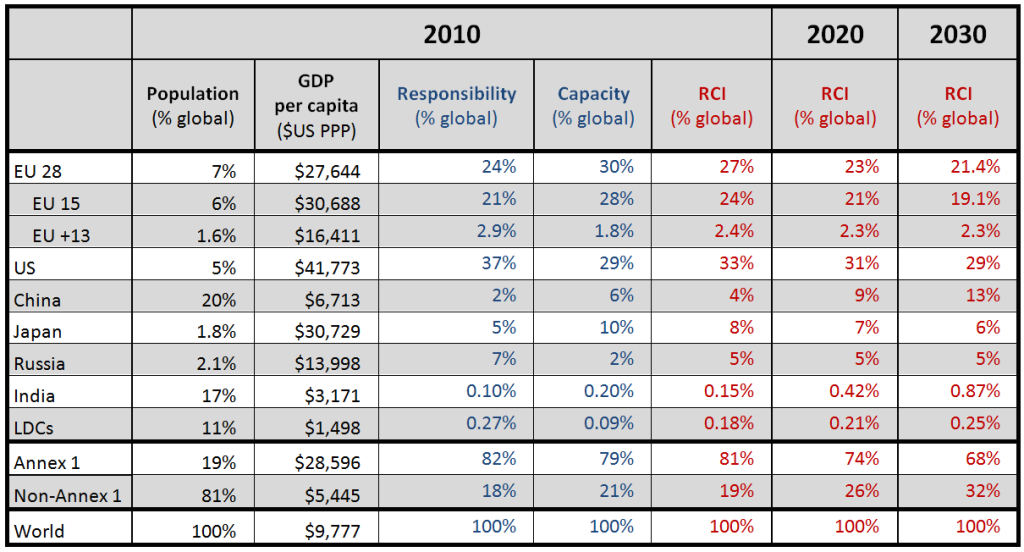 A nation’s fair share of the global mitigation effort may be quite different from its domestic mitigation potential. For wealthy and high emitting countries (i.e., those with higher capability and responsibility, like the U.S.), the fair share generally greatly exceeds the country’s domestic mitigation potential (and perhaps even its domestic emissions, like Switzerland). This is especially true in countries where capability is greater than responsibility, (i.e., wealthy countries where carbon intensity is relatively low). For poor and low emitting countries (i.e., those with lower capability and responsibility, like India) – the domestic potential for curbing emissions may greatly exceed the country’s fair share of the global mitigation effort. This is the fundamental reason that fair shares must be seen not only in terms of domestic reductions obligations, but also in terms of required support for mitigation in other countries. Otherwise, the wealthier countries would be saddled with greater mitigation obligation than they can possibly discharge, and poorer countries would be left with great deal of unexploited mitigation options, an untenable situation rendering impossible the pursuit of any ambitious global mitigation pathway. Consequently, this report explicitly presents fair shares in terms of the sum of reductions achieved domestically and reductions achieved through the transfer of international support.

[1] This summary was done by the Equity / Effort-sharing Working Group of the Climate Action Network. See The Core Convention-based Equity Principles, a Climate Action Network position paper of September 2013. This discussion paper contains much more information of how CAN has defined the Convention’s core equity principles, and what kinds of indicators it sees as appropriate to their measurement. Note also that this analysis is hardly the last word. A great deal of work remains to be done on Convention-compliant effort sharing.