The Climate Equity Reference Project (CERP) approach to equity benchmarking is built upon the core equity principles of the UNFCCC. These principles have been nicely summarized[1] as follows:

The Climate Equity Reference Calculator models the CERP approach to equity benchmarking. It allows the user to select a global mitigation pathway of a specified level of ambition, thereby determining the size of the global mitigation need – the mitigation gap – that is then taken to be fairly shared among countries according to the UNFCCC principles of equity.[2] It also allows the user to estimate the global adaptation need, which is (for the moment) taken to include the loss & damage need.

More precisely, a Calculator user selects equity-related settings relating to responsibility and capability, and other key parameters. These settings, taken together, define an “equity benchmark”. This benchmark is then used (see the discussion below) to calculate national “fair share” of the global climate-related effort. Again, this effort includes not only mitigation (though most all of our attention is necessarily focused on mitigation) but also adaptation and loss & damage.

The obvious reality is that people have different conceptions of how “fair shares” should be defined. It is precisely for this reason that a transparent framework for articulating and calculating fair shares, in terms of the stated UNFCCC principles and in a comparable manner, can be tremendously illuminating and helpful. It can increase our common understanding of what climate fairness actually means from different perspectives. It can clarify the kinds of international climate arrangements that might be widely accepted as being fair enough by a wide set of actors, and thus serve as foundations for the large-scale cooperation that will be necessary in the years ahead. And it can help us to understand the kinds of equity assessment that can help move us towards such arrangements.

The CERP framework supports an infinitely gradated number of equity benchmarks, all of which, as noted above, are defined in terms of the UNFCCC’s core equity principles. Also note that, critically, these benchmarks are designed to clarify national fair shares of global needs, not national domestic efforts. Indeed, the whole point of the CERP exercise is to show how each country’s total efforts (whether undertaken at home or abroad) can be meaningfully assessed against one or another definition of its fair share.

This is illustrated by the following graphs, which show how a mitigation gap is partitioned into mitigation fair shares that are assigned to individual countries on the basis of their responsibility and capacity.

What this clearly demonstrates is that international finance and technology support is absolutely critical. Otherwise, the wealthier countries will be saddled with greater mitigation obligation than they could possibly discharge, and poorer countries will be left with a great mass of unexploited mitigation options and unfunded adaptation needs. This would be an untenable situation rendering the pursuit of any ambitious global mitigation pathway quite impossible. For this reason, it only makes sense to consider fair shares in terms that include both domestic reductions and support for climate action in other countries.

The Calculator supports a wide range of settings and parameters (any group of which defines an equity benchmark), which it uses to calculate a fair share of the total global effort (however defined) for each country. Below, as a guide to the resulting equity model, we’re going to discuss a small set of indicative benchmarks.

Note first that each benchmark is defined in terms of responsibility and capability. These core equity notions are represented in a transparent way using explicitly defined quantitative indicators: capacity is defined using indicators that reflect income, and responsibility is defined using indicators that reflect cumulative GHG emissions. Various ethical perspectives on these two underlying equity notions are possible, so the Calculator presents the user with various settings and choices relating to how to interpret responsibility and capacity.

We’ll return to this critical point, but first let’s look at some indicative equity benchmarks. Here’s how the Calculator’s Equity Settings panel expresses the key choices that define them (and do note that if a Calculator user clicks past the above panel, they will get a richer set of controls reflecting other choices, allowing the user to define many more cases).

A bit more on progressivity

A bit more on responsibility

The user can make additional choices that influence the calculation of a country’s responsibility. One is which greenhouse gases to include when accounting of a country’s historical emissions. The indicative calculations shown below are based on emissions of fossil carbon dioxide and non-CO2 “Kyoto basket” GHGs, and exclude land-use emissions, though the Calculator gives the user the choice of including or excluding non-CO2 GHGs and land-use emissions.

And finally, there is the choice to exclude emissions corresponding to consumption below a particular income threshold (say because they arise from the provision of basic needs). This is entirely analogous to the treatment of progressivity on the capability side.

Putting Responsibility and Capability together

These various choices are reflected on the Calculator’s introductory settings panel (shown above), and as follows:

And, the user may set any possible weightings of the two principles, including:

All of these benchmarks (and many more, if the user proceeds to the richer underlying set of controls) can be expressed within the CERP framework. This is true despite the fact that, normatively, the choices between them can be quite stark. A highly-progressive, capacity-only benchmark that is calculated in a manner that takes internal national income inequality into account reflects an entirely different ethical perspective than a responsibility-only benchmark that is indifferent to income inequality and calculated in terms of an 1850 responsibility start date. Yet both can be expressed in terms of dynamic responsibility and capability indicators.

What do benchmarks like these mean in practice? How can they be used to inform the negotiations? To help “ratchet up” the overall level of ambition? These are big questions that involve both political and normative judgements. What we can say is that equity modeling can help make such judgements explicit and transparent, and by so doing can facilitate coherent engagement, reasoned negotiation and, we hope, convergence towards broadly shared understandings about the scale of the national actions that can plausibly be considered to be “fair.”

We show how this can work by recounting the process that led to the report Fair Shares: A Civil Society Equity Review of the INDCs[3] released in the run-up to Paris. As the CSO Equity Review coalition formed to undertake this initiative, it became quickly clear its constituent organizations held a broad range of views of equity, and could not expect to settle on one definitive equity benchmark. They were, however, committed to the dialogue, and as a matter of practicality, agreed to an “equity band” defined by high and low benchmarks that spanned their range of equity perspectives.

After considerable deliberation, the coalition agreed to define an equity band as follows:

The coalition further agreed that a responsibility start date as recent as 1990, and definitions of capability that were “Low” progressivity, were ethically indefensible and unfair, and were to be excluded from the equity band. However, a 1990 / “Low progressivity” benchmark was still judged to be politically salient, so it would be informative and useful to include it in the analysis. 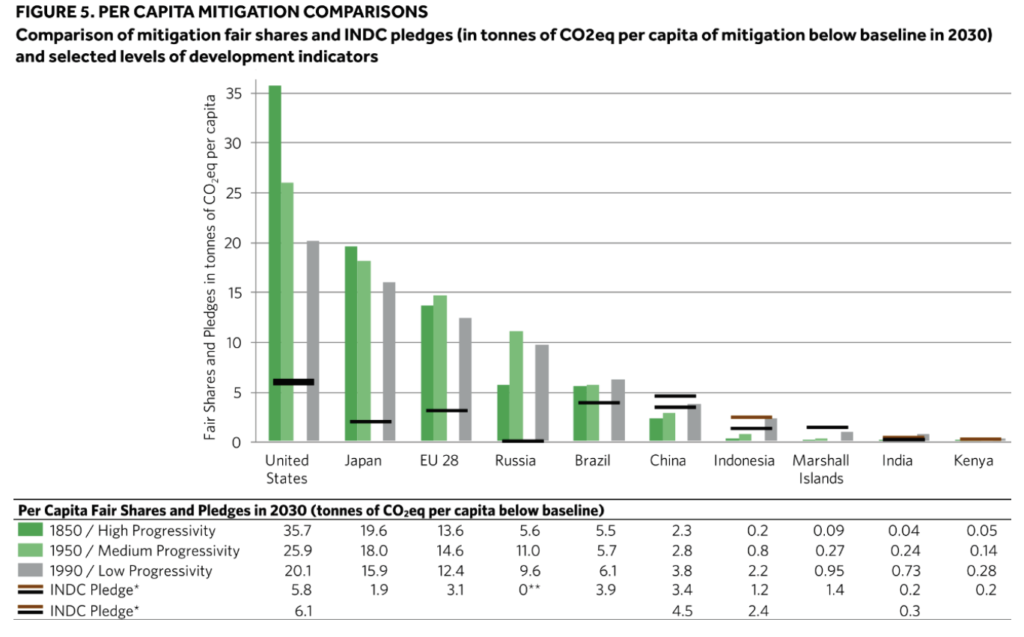 The result can be seen in Figure 5 of the pre-Paris report, above, where the national equity band is represented by the two green bars (shown here in per-capita terms) selected by the above decisions. This figure includes the 1990 / Low Progressivity benchmark, which is shown (in gray) for purposes of comparison.

The most valuable lesson of this exercise was that, despite the wide range of view represented by the equity band, and the inclusion of a benchmark well outside of the equity band, the results were still strikingly clear. Each country’s pledge could still be clearly assessed relative to the entire span of the benchmarks, and on that basis each country could be judged to be either a leader or a laggard.

The equity assessment debate is only beginning, and is not of course confined to this project. But this project does clearly demonstrate the potential for fruitful learning that is rooted in this kind of approach. For example the second CSO Equity Review coalition report, Setting the Path towards 1.5°C[4], includes two new benchmarks, designed explicitly to clarify the relative impact of capability and responsibility. 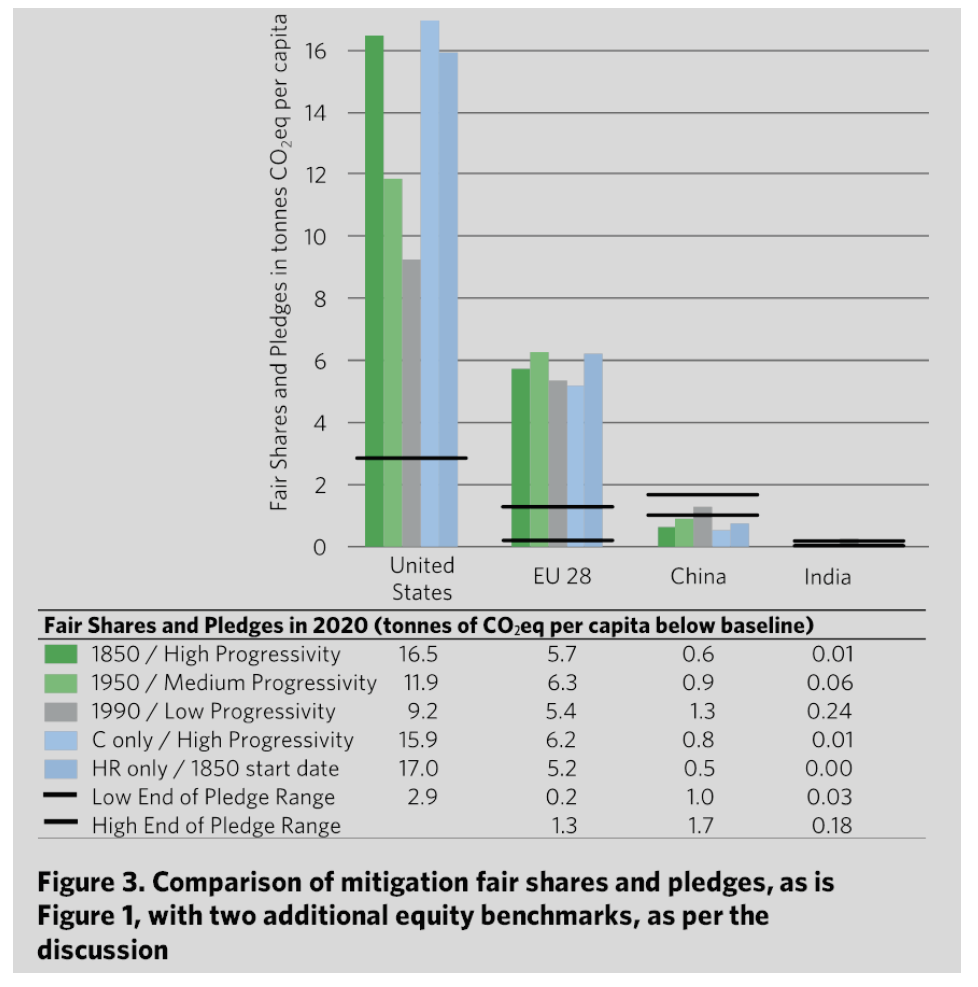 Finally, note the key message from this exercise. Contrary to widespread belief, a central result of any equitable approach to global effort sharing – that the wealthy countries must provide significant levels of support to developing countries – is not a simple consequence of the historical responsibility approach. The capability-only benchmark just as strongly conveys this same result. (This is particularly true for wealthy countries with relatively low carbon intensities – think northern Europe). The point is that capacity-only and responsibility benchmarks can themselves be strong or weak, and that this matters.

What’s the point? That the power of this approach comes from how it allows us to escape the pseudo-debate between, on the one hand, the claim that equity is an entirely subjective matter, a mere battle of opinions, and, on the other hand, the claim that one or another equity approach is the precisely “right one.” It does this by providing a quantitative framework within which explicit choices between well-specified approaches – e.g. more or less progressive responsibility and capability indexes – can be assessed and compared without being over-specified and reified. While this inevitably yields ranges instead of precise numbers, it also yields higher confidence, as a consequence of generating understandable results that transparently and traceably express explicit ethical-political choices.

To sum up: no particular equity benchmark is inherently part of the CERP framework proper. Rather this framework is intended help users articulate specific conceptions of equity, relate them to fundamental equity principles, and derive useful quantitative results from them, by for example using them to assess national pledges. In walking through these steps, users make very specific and transparent choices, which the CERP framework is set up to facilitate, codify, and illuminate.

The CSO Equity Review was, as far we know, the first attempt, by a fairly diverse group, to negotiate shared climate equity benchmarks. We consider it a success, and a useful validation of the claim that equity assessment can in fact be extremely helpful.

[1] This summary was done by the Equity / Effort-sharing Working Group of the Climate Action Network. See The Core Convention-based Equity Principles, a CAN position paper of September 2013. This discussion paper contains much more information of how the Working Group has defined the Convention’s core equity principles, and what kinds of indicators it sees as appropriate to their measurement.