The Climate Equity Pledge Scorecard was developed in and for the pre-Paris period. It was made possible by a grant from the Minor Foundation for Major Challenges and ongoing support by the Rockefeller Brothers Fund, Christian Aid, and the Stockholm Environment Institute.

We have, at least temporarily, taken it offline as we work on the next generation of our assessment system. Time has passed it by. The Paris Agreements and, more importantly, the “Intended Nationally Determined Contributions” (INDCs) that are their foundation have superseded the Copenhagen and Cancun pledges that were used in the Scorecard system.

More importantly, the Paris Agreements have given us more clarity about international support, about how to think about it and about how to represent it in science-based equity assessments like the ones being made here.

The general idea behind the Scorecard is that countries’ “pledges” – their promises of mitigation action – have to be evaluated relative to their fair share of the global effort needed to stabilize the climate system. This remains as true today as it ever was.

That said, the Scorecard was too simple. And while the system we’re now working on will be far more powerful, it will also be easier to understand. In part this is because we’ve learned a lot, but the real change is that the challenge of fair shares, and the problem of international support, are far more widely understood.

Here’s how we characterized this problem back when we launched the Scorecard:

Because of this lack of explicit and credible information, the Scorecard does not include the financial support for international mitigation in the assessment of a country’s pledge. If accountable financial pledges are ultimately made, these will be included, and many scores will improve.”

Will things improve as the post-Paris world evolves? Check back later in the year.

In the meantime, our current Climate Equity Reference Calculator contains both the Copenhagen and Cancun pledges of countries that were showcased in the Scorecard system as well as the current Paris “INDC” pledges for most countries. A longer exposé that explains the old Scorecard system and shows a few examples of scores of countries’ Copenhagen/Cancun pledges is still on our site: 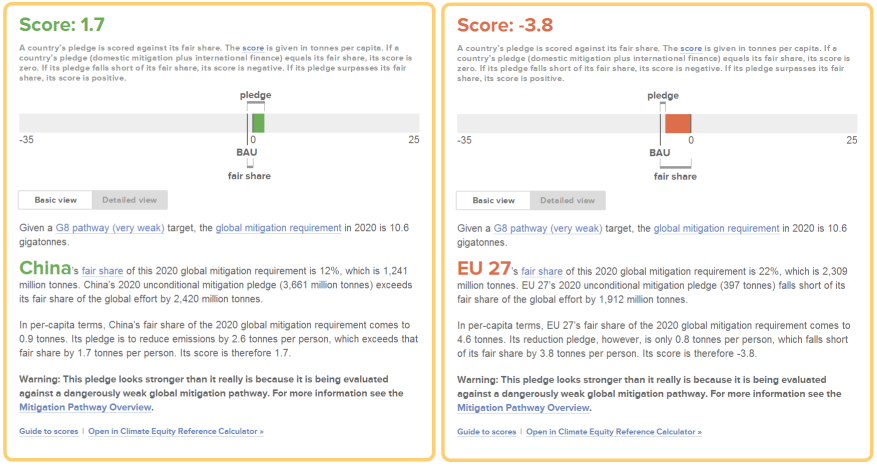 Example: Climate Equity Pledge Scorecards for the Copenhagen/Cancun pledges of the EU-27 and China, under a weak global mitigation pathway.