Ideally, an assessment of national INDCs would start with a specified level of global ambition (e.g. a 2°C compliant global emissions pathway) and a coherent and well-specified notion of national fair shares, one based on a transparent interpretation of the core equity principles of the UNFCCC. There are two difficulties with this.

There are two questions that the notion of comparable efforts can help answer. The first question is: If Country A is pledging to do X% of its fair share, what would Country B have to pledge to also do X% of its fair share? The second question is: Of what overall global mitigation effort can Country A claim to be pledging its fair share, assuming all other countries make comparable efforts by doing their fair shares? Both of these will be explained below using the example of the EU’s INDC, which is taken here to be straightforwardly “40% below 1990 emissions.”

The table below, and the Comparable Effort Worksheet, show how these questions can be answered. (See also the National Fair Shares report for details.) First, “What effort (for any other country) would be comparable to the EU’s at “least 40% below 1990” pledge?” To answer that question, we can calculate what fraction of EU’s fair share of a global 2°C effort its INDC comprises, and then for any other country how much mitigation it would need to pledge in order to contribute the same fraction of its own fair share. We estimate that the EU’s INDC amounts to roughly 2.0 GtCO2e of mitigation effort below the EU’s projected 2030 baseline. This is approximately 22% of the EU’s fair share of a global 2°C mitigation effort (9.0 GtCO2e) in 2030 as calculated using the Climate Equity Reference Calculator set to the High Equity settings, or 27% of its fair share (7.5 GtCO2e) calculated using the the Low Equity settings.

Applying the same percentages to the fair share mitigation of, for example, the United States and China, we can calculate their comparable mitigation efforts relative to their own Business-as-Usual baselines, and get 4.0 GtCo2e and 1.2 GtCO2e respectively. Translating these to the 1990 base year, this would mean for the United States that an “at least 41% below 1990” target would be an effort comparable to the EU’s “at least 40%” (since the United States typically utilizes 2005 as its base year, we can also translate this to “at least 50% below 2005”), while for China, a comparable effort would be to limit its emissions growth to “525% above 1990 levels”. For the Low Equity settings, the US’s effort would have to be “at least 15% below 1990” (or “at least 27% below 2005”) to be comparable to the EU’s INDC, while China would have to limit its emissions growth to “490% of 1990 levels.”[1] The same calculation for all remaining countries together (Rest of World) gives 3.2 and 5.8 GtCO2e using High and Low Equity settings, respectively. [2] 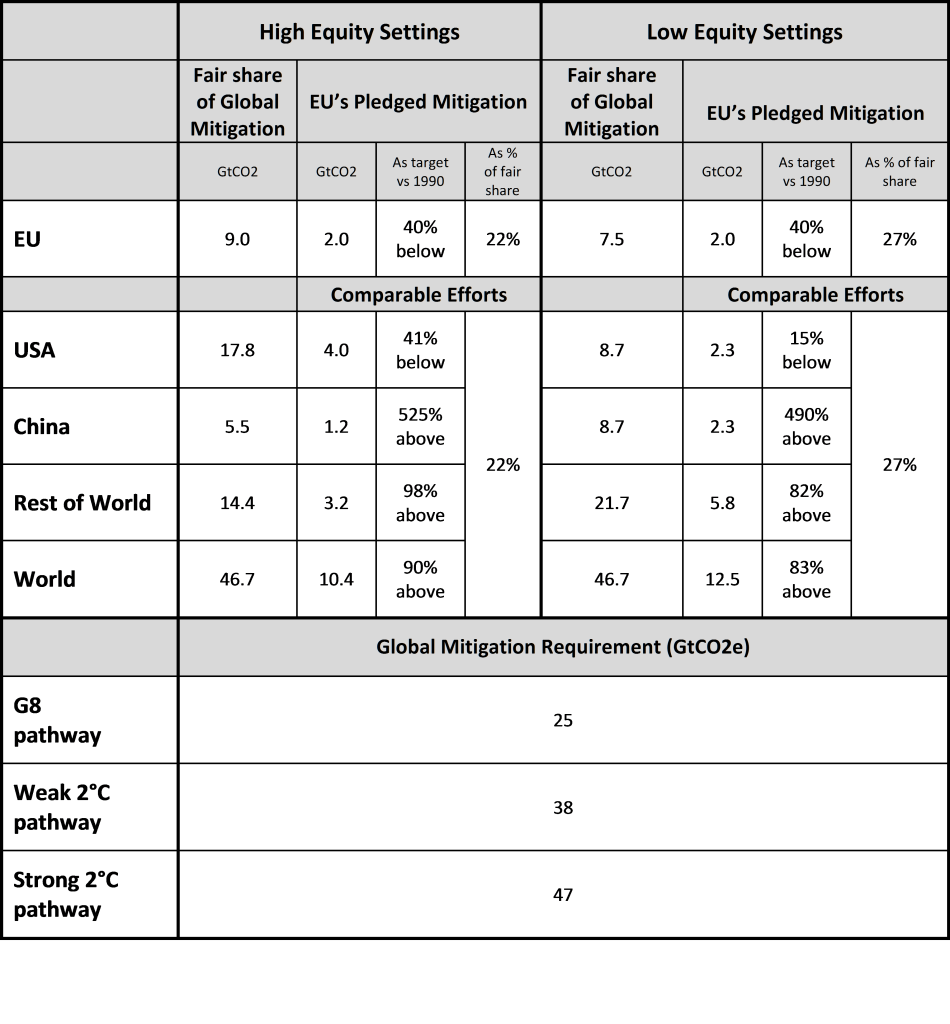 Assessing the level of effort for the USA and China (and Rest of World) that would be a comparable effort to the EU’s INDC, by positing that each does the same percentage of its fair share of the global mitigation as the EU. The US would have to reduce its emissions 41% below 1990 levels to offer an effort that is comparable to that implied in the EU’s INDC, calculated using the High Equity settings, while China would have to limit its emissions growth to 525% above its 1990 level. Using Low Equity settings, these figures are 15% and 490%, respectively. The resulting total mitigation globally is 10.4 GtCO2 and 12.5 GtCO2 using the High and Low Equity settings, respectively.

The table above also presents the answer for the second question, telling us to what overall global level of effort would the EU’s INDC make up a fair share contribution. Adding the EU’s INDC to comparable efforts from the US, China, and Rest of World, we see a global total level of mitigation in 2030 of 10.4 GtCO2e using High equity settings, or 12.5 GtCO2e using Low Equity settings.

This is shown graphically below. The EU’s “ambition band,” shown in light red, represents the range of global mitigation that would be achieved if all countries matched the EU’s pledged mitigation with comparable efforts under specified equity settings. The total mitigation achieved still leaves a large shortfall, even if one takes the lower edge of the ambition band, and even in comparison to the least ambitious (G8) of the three 2°C pathways. This is true for the simple reason that EU’s 2.0 GtCO2e pledge is only a small portion of its fair share of the required global mitigation, even under the Low Equity settings, and even compared to the relatively modest level of mitigation required by the G8 pathway. (The EU’s 2.0 GtCO2e amounts to less than 8% of the 25 GtCO2e of mitigation required to reach the G8 pathway, and roughly 4% of the 47 GtCo2 required to reach the Strong 2°C pathway.) 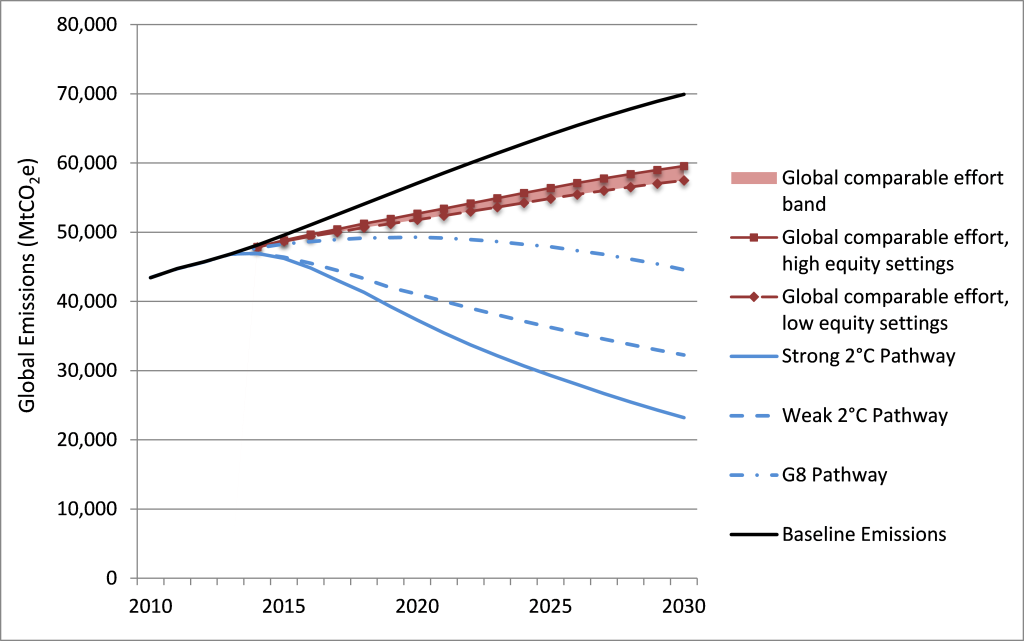 For the EU’s INDC to define a mitigation contribution that could be considered a 2°C effort when matched by comparable efforts by all other countries, one of the following two situations would need to apply:

First, the EU’s fair share of the global effort as calculated by some other approach to equitable effort-sharing would somehow have to be found to be much smaller than that found using the Equity settings considered here. However, since the Low Equity settings assume that capacity is defined with zero progressivity (no development threshold that excludes the income of even the very poor from the calculation of a country’s capacity) this would effectively require a “fair shares” arrangement that is actually regressive, in essence requiring poor countries to contribute more per dollar of income to the global effort than do the richer countries.

Or, second, and far more plausibly, the EU’s pledged domestic mitigation could be accompanied by a second commitment, one to provide a significant level of international mitigation support. Given the small size of the EU’s pledged domestic reductions, its pledged international support would need to be quite large – roughly two times larger in terms of tons of mitigation supported assuming Low Equity to reach the Weak 2°C pathway, and as much as four times larger assuming High Equity to reach the Strong 2°C pathway.

[1] Most of this increase, of course, is attributable to China’s economic growth since 1990. See the Calculator for details.

[2] Note: We use here the Strong 2°C pathway to show the calculation of comparable efforts, but the results are actually independent of the choice pathway. A different pathway such as the G8 pathway would lead to a smaller fair share for the EU (and all other countries), and imply that the EU pledge makes up a larger percentage of its fair share, and the end results would all be the same.